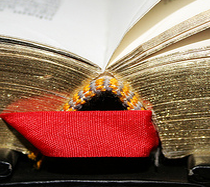 How Can we Trust the Bible? 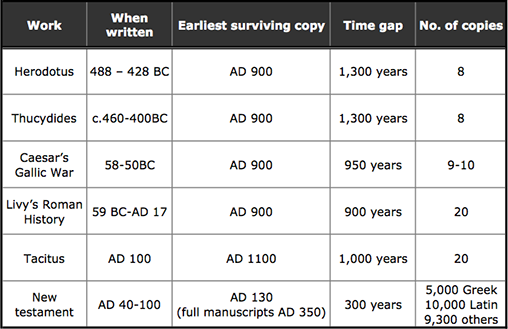 Looking at the extreme right-hand column, the greater the number of identical surviving copies we have, the more certain we can be that what we’ve got is an accurate copy of what was originally written. For the New Testament we have a total of 5,664 Greek manuscripts, and these were found in locations all over the ancient world. The similarity between them and 10,000 Latin manuscripts and a further 8,000 in Ethiopic, Slavic or Armenian, means we can reconstruct the text of the original New Testament from these copies.
The result, according to scholars Norman Geisler and William Nix, is that ‘The New Testament, then, has not only survived in more manuscripts than any other book from antiquity, but it has survived in a purer form than any other great book’ (Norman L. Geisler and William E. Nix, A General Introduction to the Bible 1968; reprint [Moody Press, 1980], p. 367, cited by Strobel, The Case for Christ [Zondervan, 1998], p. 65).

Summing up, Sir Frederic Kenyon, perhaps the world’s greatest expert of Greek papyrus and the former director of the British Museum, said: ‘In no other case is the interval of time between the composition of the book and the date of the earliest manuscripts so short as in that of the New Testament.’ He concluded: ‘The last foundation for any doubt that the scriptures have come down to us substantially as they were written has now been removed’ (The Bible and Archaeology [Harper, 1940], p. 288,cited by Strobel, The Case for Christ, p. 63).