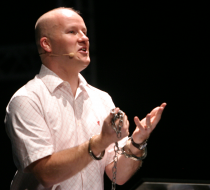 Thirteen people responded for salvation, and two people were healed on Sunday 23rd May when I visited The Beacon Church, Camberley. I preached on the Thief on the Cross, and towards the end of the preach, we turned the lights off and shone a spotlight onto 17 people who participated in a “cardboard drama”. (Some of you will have seen this done on You Tube) It was really powerful live as each person had written down what they were like before Christ, and then flipped over a cardboard sheet to show what they’d written about what they were like now they’ve come to know Christ. So it was a marvellous way of presenting 17 salvation testimonies in 3 minutes while “Amazing Grace” boomed out of the sound system! I then went into the salvation appeal, and it seemed the church were encouraged by the response. (There were just over 300 people there in total.)

I prayed for the sick before the sermon and I have to confess, that I had been believing for more of an impact in terms of healing. We had one lady who ran around saying that her lungs were healed. And a guy who was healed of back pain. I was disappointed that we didn’t see more. And I guess I am still learning.

The guest service at Camberley was just one of 20 simultaneous gospel healing Sunday mornings which were held by newfrontiers churches in Surrey and the surrounding area as part of our latest Front Edge weekend. In total, 94 people said “yes” to an appeal for salvation across the 20 churches. We got this information from a report back session on Sunday night when we all came together to celebrate what God had done and to pray for the new Christians across the participating churches.

On the day before I spoke twice at the Front Edge conference in Woking, where we had about 300 in attendance.

So I drove down to Woking to talk to Christians about evangelism on the Saturday morning, and drove home on Sunday evening, knowing that 94 people had responded to salvation, and we must have had at least 50 people testify to being healed across the participating churches, so it was really satisfying to see some immediate results!