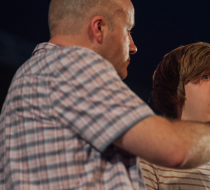 Here’s another report, written up online today for the first time . . . At Newday 18, Jack Carter, (pictured, then aged 19), from Braintree, told us about his healing at Newday, a year previously. On stage in front of 7,250 people Jack told us: “I’ve been healed from Coeliac disease, an incurable condition.”

“Six years ago I discovered I was a coeliac. I had diarrhoea, severe stomach cramps, I lost 7 pounds, and if I ran my hands through my hair, my hair would fall out.

“Before I was diagnosed, I was down to about 50 per cent school attendance for six weeks when I was in year 9. I had to have blood tests. I had to have a biopsy, and a camera down my throat.

“The condition is a problem with the villi in the bowel. When you have coeliac disease and you don’t follow the diet, the body attacks itself, and the villi are destroyed, they don’t grow back. That’s why it’s incurable. So you can’t eat wheat, barley and rye. You have to avoid gluten at all costs. Bread for example is a problem.

“But after 5 years of coeliac, I believed I’d been healed at Newday 17, but of course you’ve got to test it out, and there’s only one way to do that, and it’s eating things you’re not supposed to eat.

“After you prayed for healing at Newday, I started testing it out myself (without my mum’s knowledge) for about 4 months. Every lunchtime at college I’d be trying new things, and by the end of the 4 months I was eating anything. I’d eaten enough to make myself substantially ill. In other words I’d totally disobeyed the diet, but I felt fine.

“Then my yearly blood test came around, Dec 17. I had not complied to the diet at all. These are the same tests that proved that I needed the biopsy in the first place.

“I had the exact same blood test. I had a dietician appointment 3 days later. They said ‘your TCG levels are fine. You’ve been following the diet very well.’ But of course, they had no idea that I hadn’t been following the diet at all! So it’s a big deal because it’s an incurable condition. You can’t grow out of it. But I don’t have coeliac anymore!”