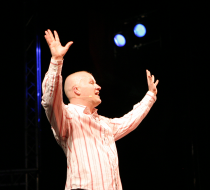 A Man with an Arthritic Knee is Healed in Bournemouth and 13 People Respond to the Gospel!

“I can run!” shouted a middle aged man, as he jumped off the stage and started running down the aisle at the St Swithun’s Centre, Bournemouth on Sunday morning, “I haven’t done this for years,” he said. “I’ve had an arthritic knee.” There was an infectious enthusiasm about his healing testimony. It reminded me that when a real healing takes place, that you can’t contain the joy. I had the same feeling when interviewing a young woman from Austria, who had just been healed, 2 minutes earlier, of a long-standing injury she’d picked up playing football. She was just so surprised by joy, that everyone started applauding. In the first service at CityGate Church, Bournemouth, there were 8 people who responded for salvation of which 7 came forward at the end to be prayed for. I was delighted by this response, especially as this was a new message, or at least one that I haven’t preached on a Sunday before, on the Prodigal Son. It was a variation on what I did at Southampton University CU earlier this month.

So as I prepared for the second service, I was asking God for more, especially as I knew there’d be a bigger crowd in the second meeting. Sure enough, the venue was full, and after 3 people were healed (including the Austrian girl mentioned above) I felt I preached much better in the second meeting. I was more familiar with the message and really felt “in the zone”, so when the appeal came, I was a bit disappointed. A total of 5 hands went up, of which only 2 came forward. So I was a bit perplexed by that, but overall, I was delighted that across both meetings, 13 people responded to the gospel, and at least 5 people came to the microphone to report a healing, so that was great.

I always love going to CityGate Church, who have hugely supported and welcomed me over the years. It’s one of the most evangelistic churches I know. Some years ago, they asked me to preach at the football ground, which was an unforgettable experience, with a stage on the pitch. I felt like I had almost fulfilled my destiny!